Home » Solar energy to reduce the mortality rate in childbirth

Ivory Coast’s short war in 2010 had an impact on government investment in public services. Since 2011, the country has experienced significant and stable growth, but it still has a lot of work ahead to improve the living conditions of its inhabitants, especially in health care. Less than 10% of the population had health coverage in 2016 and the neonatal mortality rate was around 3% in 2019.

The project initiated by Shekina in partnership with Walezi ‘Solar energy for better health in Ivory Coast’ was born in this context. The two associations had already carried out an electrification project in Cavally and wanted to establish themselves in the central region of Ivory Coast. The MODAL project, launched by ADEPT, encouraged applications for this region and the two organisations jumped at the chance to respond.

The two beneficiary clinics are located in a landlocked area without access to electricity. Currently, a large proportion of women in the region deliver their babies at home, despite the risks involved. However, those who go to the health centres do not give birth in optimal conditions. “The medical staff have no light and have to use torches and candles”, Ange explains. “Last year, a midwife told us that sometimes during labour, a snake comes in and she hesitates between killing the snake and helping the woman deliver her baby. That’s why our priority is to electrify the centres with high birth rates. We go to health centres to enable deliveries to take place in better conditions and to reduce the mortality rate in childbirth.”

– An innovative and sustainable solution

Every year, new senior health professionals are trained in the country’s universities, yet access to health care is still difficult, especially in rural areas that lack adequate infrastructure. In Ivory Coast, the use of solar energy is still very marginal, but for Ange, it is a relevant solution to overcome the lack of electricity. “The country is not fully electrified. There are many villages that are in the dark and the health centres do not have electricity. We observed this phenomenon and decided to write this project. We should ask the government why the use of photovoltaic panels is not standardised, but we are doing our part. We are bringing development, we are bringing energy and the beautiful thing is that it is renewable energy.” This form of energy allows these centres to be totally independent. Even if one day the authorities decided to electrify these villages, the centres would still have some autonomy. “In case of a power cut, the health centres would still be electrified, so that the health workers can work in the best conditions.”

Shekina and Walezi organisations have already worked on 3 projects together. Through this new initiative, they want to electrify the Bonikro and Takra Adiekro health centres in the Gbêkê region. This initiative will install 20,000 KW photovoltaic panels in the two villages. As a result, 10,000 beneficiaries will have access to better health care. Shekina was attracted by Walezi’s dynamism and its ability to resolve problems with the local authorities in Ivory Coast. “In terms of agriculture, we have provided them with soilless culture and new industrialisation strategies. This partnership has enabled the 600 women of Walezi to become financially independent and to improve their living conditions. By working together, our presence in Ivory Coast has been strengthened and Walezi has become better known.”

– About the partner organisations

Shekina is an organisation of the Ivorian diaspora in France, which helps the needy to improve their economic and social situation. Within the framework of this partnership, Shekina takes care of various administrative aspects : project implementation, communication and promotion on social media.

Walezi is an Ivorian association that supports women in their economic and social development. The association is responsible for the follow-up in the field, the selection of partners and the training of beneficiaries. 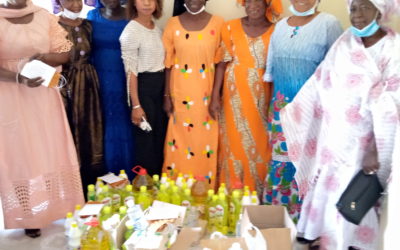 School Infrastructures to Promote Equal Opportunities for girls in Nemataba

The associations MJVF and MAREF responded to MODAL’s call for projects in order to finance part of the reconstruction...